Bunnycutlet Presents 7 Artists show opened with great success - Sad that it's over but it was a blast! Special thanks to Liz of Bunnycutlet and the folks at The Cotton Candy Maching for an amazing show. Here's just a couple full reveal images from the exhibit.  Wish you coulda been there!

This below is a layout for the wall.  you can really see the color and light story that runs through all the pieces as a group. It's on of my favorite things about working like this and makes seeing the work in person a special, one-time only experience. 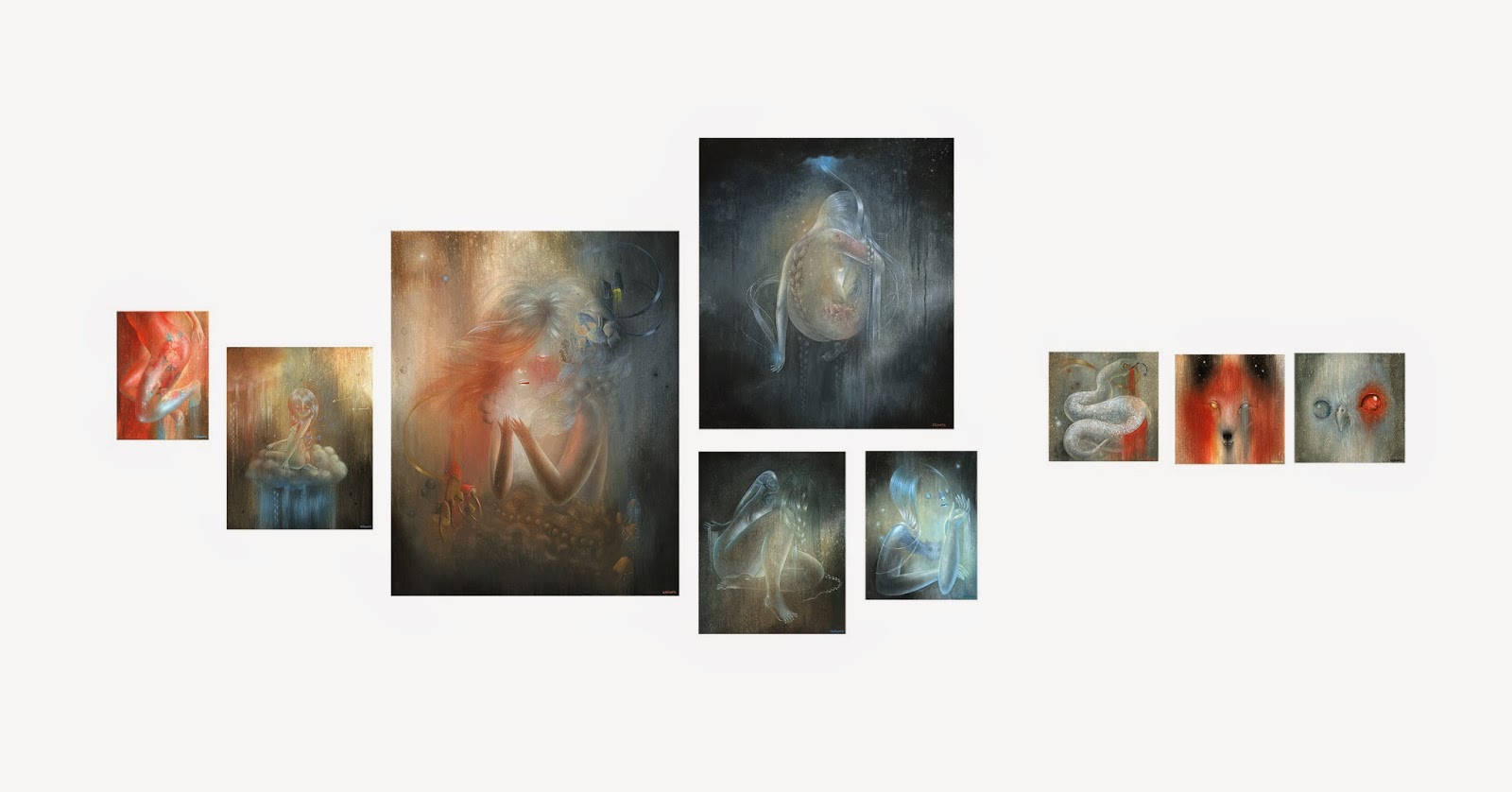 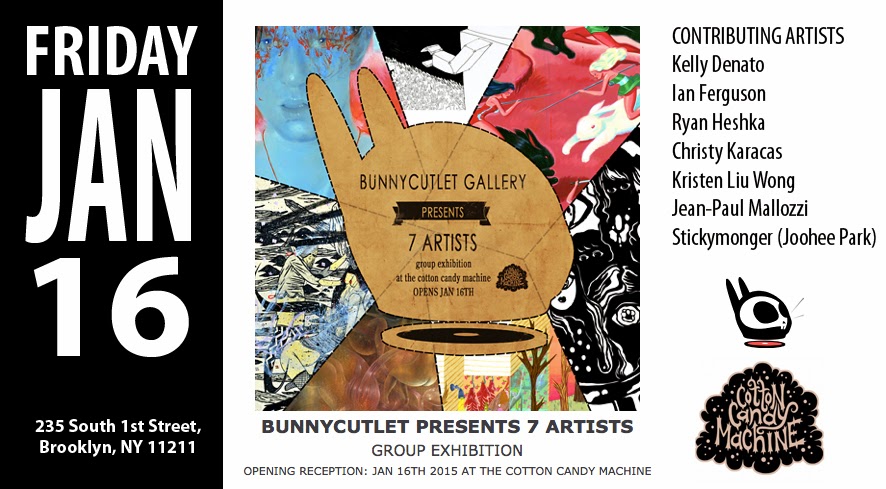 Bunnycutlet is back! Well, it never really left, this is the second show since the closing of the physical space on Roebling and it's definitely one to get excited about - showcasing 7 outstanding artists at the awesome and gracious Cotton Candy Machine gallery space. I'm a big fan of all the artists involved and  and honored to be a part of it.  Hope to see some of your faces there...

Since I can't do full reveals until after the opening on FRIDAY - for a little pre-show treat I'm going to share some of my research, inspiration, sketches, and general making-of for this exhibit. You know, for all two of you who care about that sort of thing :) 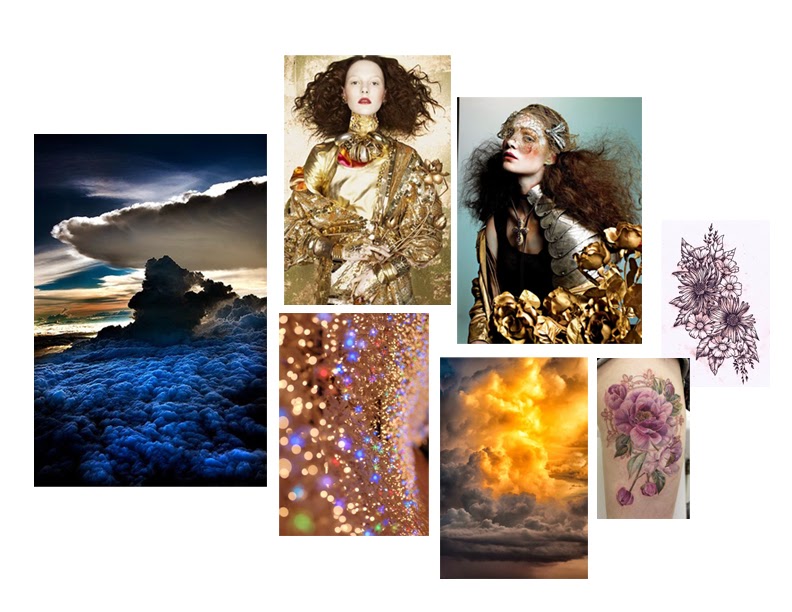 I wanted to incorporate deep blue grey-winter skies, silver, and mud with pops of a little sickly green and hot cadmium red-orange. I desaturated these a bit for my color layout (below) because I wanted to do something more illusive and tonal for this series and ended up with some very mirage-like imagery.  Seriously, in certain light, the images seem to disappear altogether.  Sort of like that disorientation that all-grey-all-day winter days can do to you... My reference has more golden pops than I ended up using in my final series but it was a great springboard. 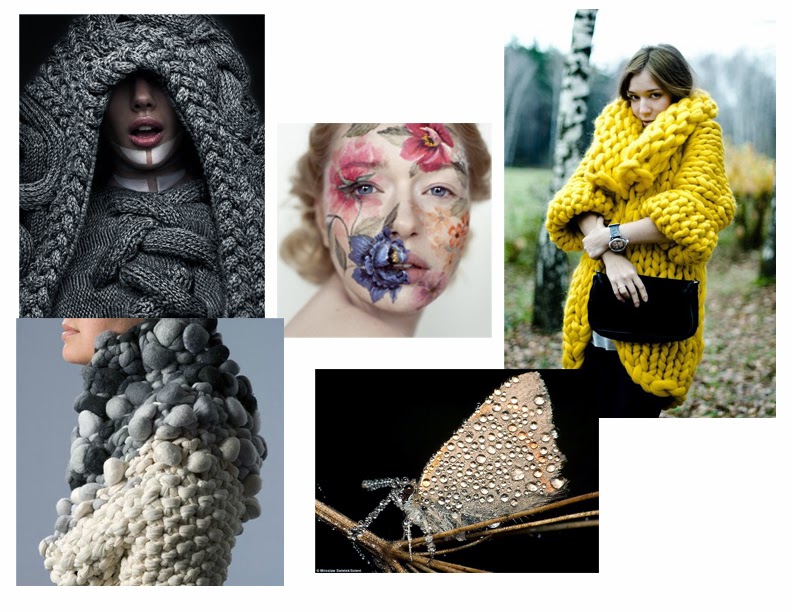 I wanted to incorporate some knit patters into the series.  Some of the research I came up with on this was awe-inspiring and it's certainly a theme I'd like to revisit when I have more time. I ended up using the knits patterns pretty sparingly in the end - you can see them in the mud, on a spine, and then mostly it evolved into braided hair. 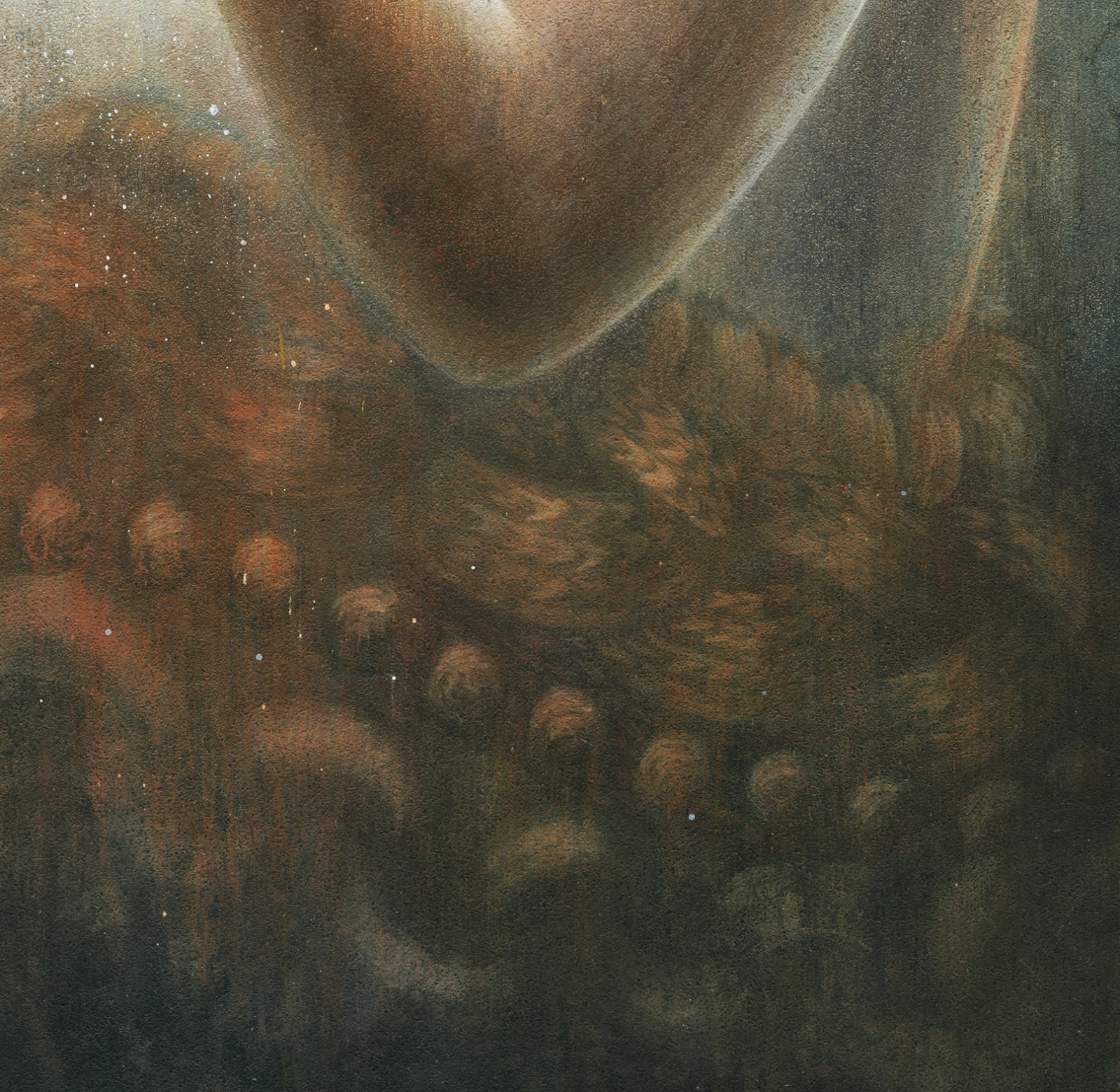 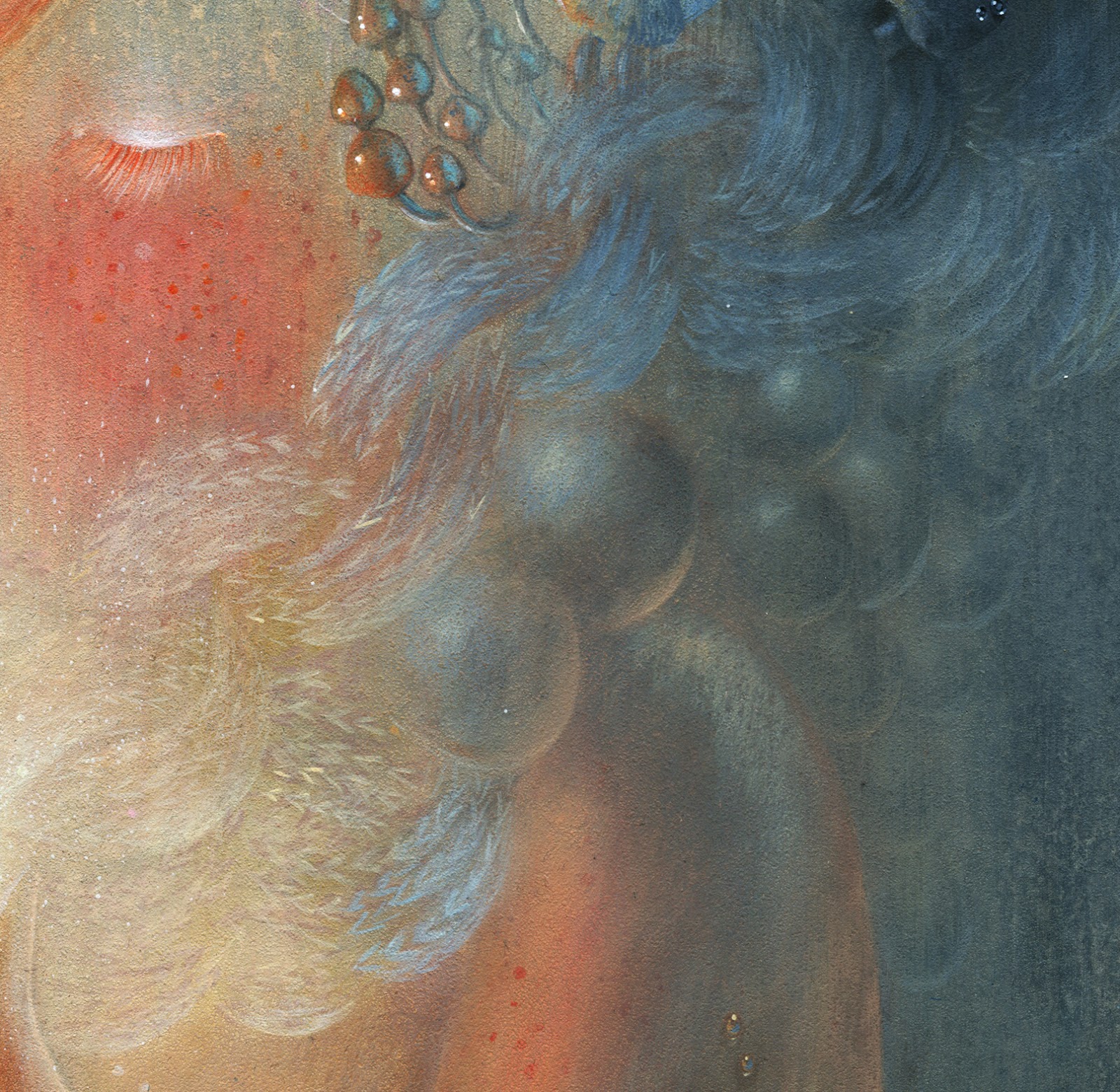 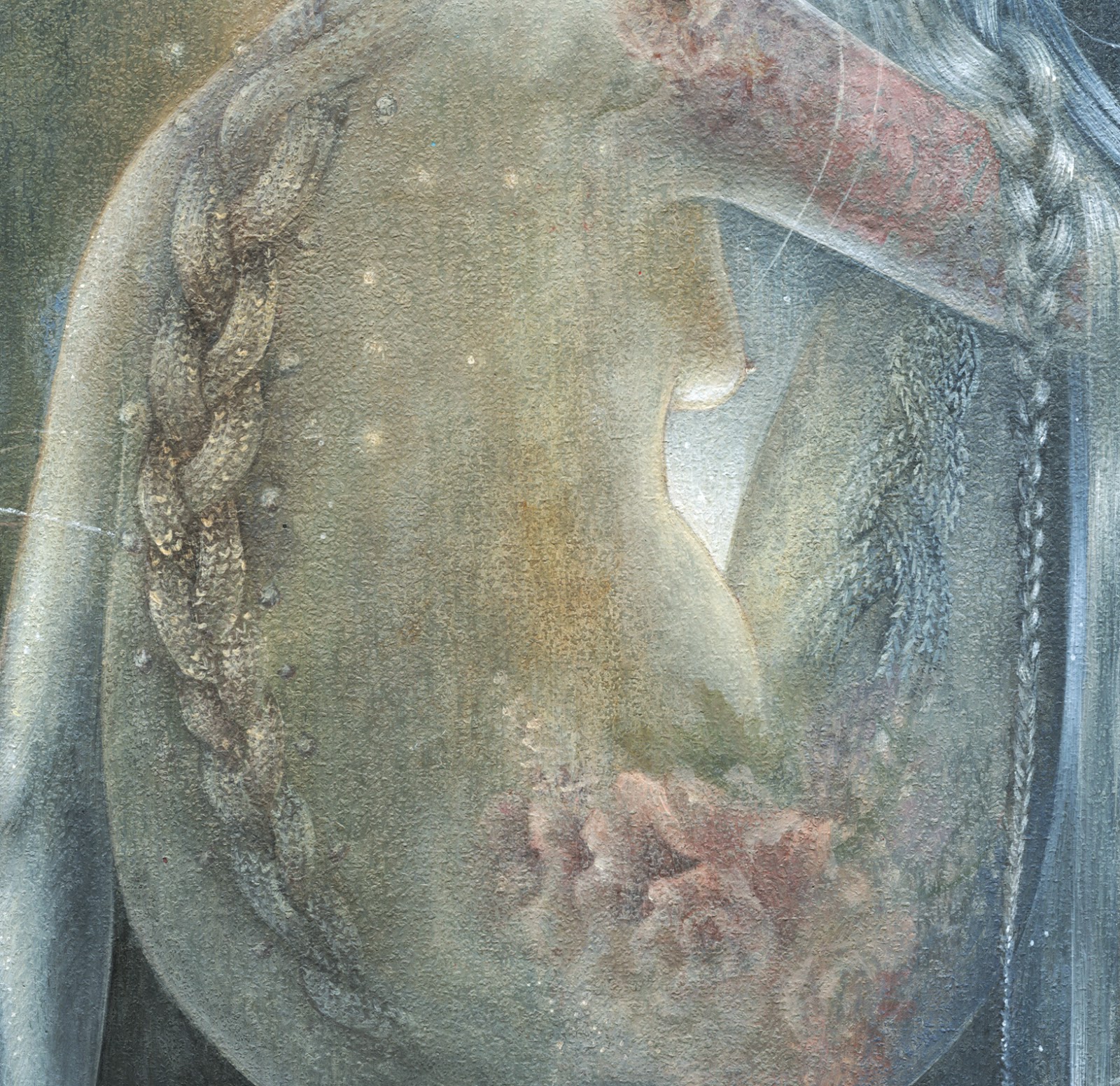 For the small, 3 painting set I was inspired by the owl you see there in the reference below.  His eyes look like windows into the cosmos O_O It was love at first sight. Ironic because apparently he is blind. I was taken with the idea of the blind predator and moved forward with that, incorporating a fox, a snake, and an owl. I chose the fox image below as reference because I felt the snow on the black of the ears looked like stars. 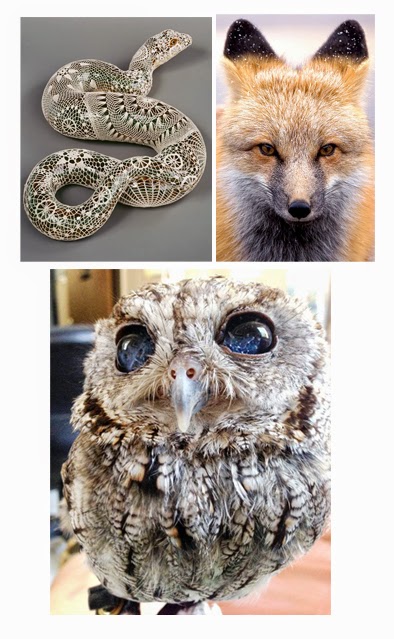 If you made it this far, you get to see all the animal paintings NOW! Yay, you!

Now, REJECTED! These poor little sketches never made it past the doodle stage.  I still see potential in them though and who knows, maybe they'll turn up sometime down the road.... Oh yes, and that one little painting that just didn't quite fit in with the grouping so, it gets nixed! 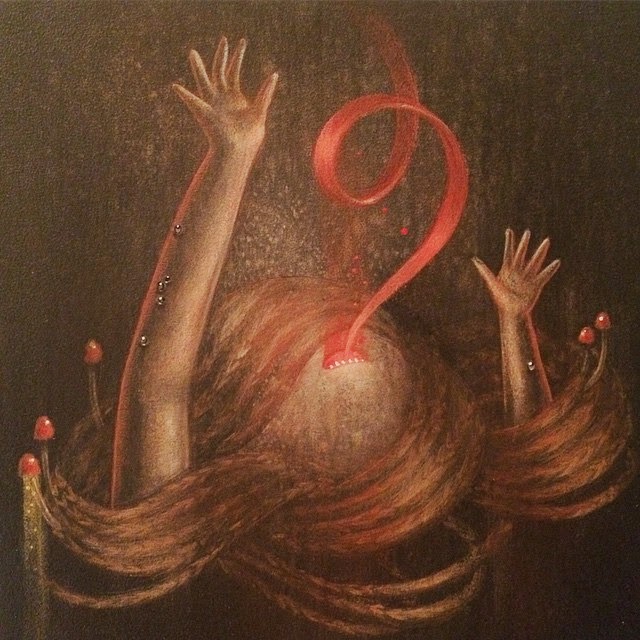 That's all for now, I'll update this post after the opening!