"Fall Into Frost" at My Plastic Heart

My "Fall Into Frost" work will be on display at My Plastic Heart with the talented Julie West - show opens Friday, November 16th

Below are some images of drawings and paintings of "Fall Into Frost" - The paintings up currently are the "Fall" paintings.  Images from "Frost" and more details to come SOON! 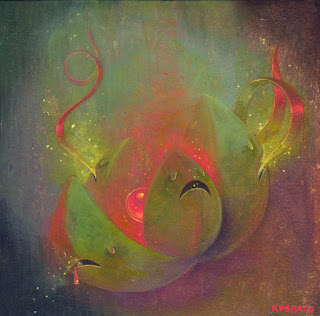 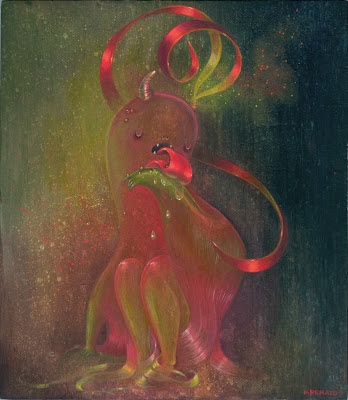 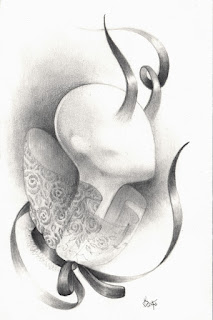 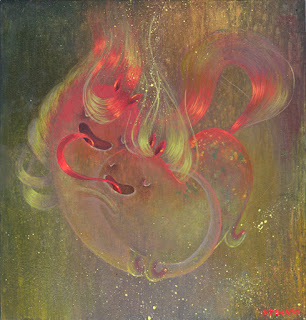 "Fall Into Frost" is a series of paintings and drawings.  Autumn to Winter is a brilliant and enigmatic change of season - at least for those of us who experience the 4 seasons.  The treetops and ground are covered in these tiny, quivering, prismatic carcasses. Deep greens explode into a golds, reds, and pinks. A last colorful burst before the world goes grey.  Animals scurry about to consume, save, and store for the coming months.  The wind begins to chill and blow and our breath becomes visible, vapors of escaping spirit.  It is a time of transition, a decent from the apex of a climb to life that began in spring. Blooms, blossoms, bulbs, sprouts, and seeds have all reached the end of their cycle and now begin to retreat into dormancy or death.   This transition from dynamism to oblivion, vibrant to bleached, the idea that instead of a slow decay, something can be it's most beautiful just before it's dust - these are the motivations behind "Fall Into Frost". The turn of phrase below inspired, and was inspired by, the works for this show.

"Autumn wears her jewel tone mourning dress,
visits the graveyards of leafy tombs
until grays and whites adopt the land,
and the earth lies in its winter womb;
the last vivid gasp before the frost." - m.d.

Too Art for TV 6 Opened November 9th at the brand new Bunnycutlet Gallery in Brooklyn. If the crowd was any indication, the show was an immense success.  The work spoke for itself.  Below is my contribution to the show - 7 small paintings. Several of the images were born whilst I was waiting to serve jury duty and shortly after I had realized that I had left my grandmother's ring in the juror's lavatory from which it had "vanished".  I've included those drawings here as well as the way the paintings are meant to be hung and seen.  Of course they are sold individually but I think seeing them in their original arrangement is revealing. 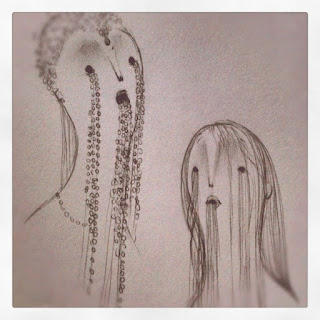 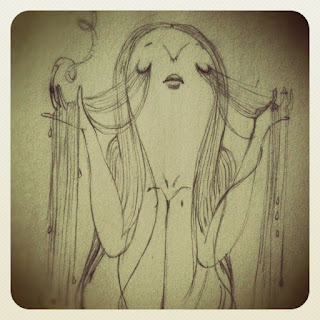 Been super busy prepping for shows this month so I haven't had much time to post about them.  I'll try and make up for that this week :) For now I'm posting this flyer below with the info in BOLD for upcoming openings from this Friday, November 9th - Friday, November 16th.  This way, at least you have the basics!

I'll be posting sneak peek, sketches, and WIP photos soon.  Thanks for your patience and I hope to see some faces at these openings! 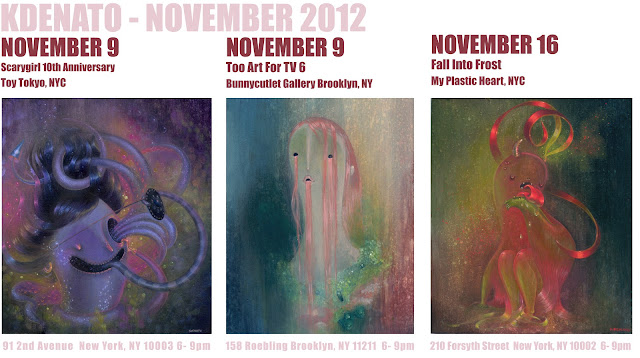 Some links below for more info on the galleries and artists!
Toy Tokyo
Scarygirl / Nathan Jurevicus
Too Art for TV
My Plastic Heart
Julie West
at 11/05/2012 03:24:00 PM No comments:

Just what is under that little eyepatch young lady...

Last time for for G1988 's Video Game Theme Show I did "Dig Dug on the Mountain" seen here http://www.kellydenato.blogspot.com/2011/09/dig-dug-on-mountain-gallery1988-venice.html
This year it's a little sculpt called "Kirby Unravels" !!

Below are some comps of Kirby's development - sketches and work in progress as well as a sneak peek at the final piece!  I'll post the  comp of the finished piece after the show opens on October 26th - in the meantime...

My Pandroid APs go on sale from my shop www.kdenato.bigcartel.com TOMORROW! Thursday October 18th 3pm EST/12pm Pacific.  Remember, I only have 10 so get on it!

Because of the amount of info and images I'm about to post about the Pandroid AP's, I've decided to make it a separate blog entry from the NYCC entry.  For information regarding NYCC please visit the previous post. Basic information - 15-20 these will be available at the My Plastic Heart booth at NYCC. The rest will be available online in my soon-to-be bigcartel shop. Prices and details soon. There are ONLY 30 total so.. yeah. These will be blind box! Don't know what yer gonna get and not tellin' :P There are 15 with Jugs of Wine & Grapes, 8 with Pink Wabbits, and 7 with Purple Wabbits - Good luck!

PANDROIDS!
My Pearly Pandroid Army!!! Armed with Pink and Purple Wabbits with Flocked Tails and Jugs of Wine with Handmade Glass Grapes - Look out world...

Check it out guys! Nothing fancy but still - pretty exciting :) Currently available are my Super Hero inspired prints created for NYCC 2012.  They are 8x10 Giclee's on lovely archival velvet paper. Get ya some :P Also coming soon a limited selection of my "Pandroid" Android Series 3 Artist Proofs! Feel free to hit me up about anything you might like to see up there.

Hey guys! NYCC is over and DONE!! What an awesome and exhausting weekend :P I met so many great people - artists and fans alike and had such an incredible time.  During my time at the Art Whino booth I was live painting - I didn't finish before the end of the con but I feel like I made some good progress and can't wait to see this thing through to completion! (WIP shots below - hooray! Apologies in advance for the terrible quality of the images)  I'm also posting some shots from the booth itself and general NYCC 2012 happyfungoodtimes :)


NYCC is closing in! I've been so busy preparing I haven't had much of a chance to update lately! First - DETAILS! I'll be at the Art Whino booth #3212 (i am pretty sure...) most of the time doing live painting with an awesome group of folks! And also doing a signing there on Saturday at 1pm.  If you miss that dont fret! I'll be at booth My Plastic Heart  #3313 doing signings there as well! (@2pm Saturday during Andrew Bell's singing hour) My Plastic Heart will have a LIMITED number of my Android Series 3 - Pandroid APs with an exclusive print and companion mini sculpt! The work in progress shots and print image are below.  You'll be able to choose a wine jug or a bunny (15 of each total) :)


NYCC 2012 is just around the corner folks - October 11-14th! I'll be participating in Art Whino's booth for the entire weekend with a lil visit to My Plastic Heart's  booth - it's exciting!

My Plastic Heart's booth will be host to tons of great designer toys and artists signings.  I'll be there with some of my Android Vinyl Toys Series 3s & exclusive companion prints (I can show you all this after the public release September 24th so be on the lookout)

Art Whino booth includes: Adrian Viajero Roman, Angry Woebots, Ekundayo, J★RYU, Jeremiah Ketner, Josh Taylor, Lamour Supreme, kaNO, and Lou Pimentel - the dudes I know are some seriously fantastic dudes :) And the ones I don't know I'm sure are pretty special too. One thing for sure is they are all supremely talented! We will all be LIVE PAINTING (I'm terrified) at the booth and doing signings throughout the weekend.  Booth #'s and signing times I'll post as soon as I get them.

I've posted some of these sketches on instagram/twitter but here they are san's ig filters and pre-color.  Most are painted and ready to go but I haven't decided which will be made into prints for the con.  Maybe all of them?? How to decide...